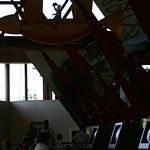 Baddeck
Things to see at Baddeck:
A bucket list of the top sights at Baddeck, ordered by popularity.

It is the county's shire town and is situated on the northern shore of Bras d'Or Lake on Cape Breton Island. According to some historians the name Baddeck is derived from the Mi'kmaq term "Abadak" which has been translated as "place with an island near" (in reference to Kidston Island, immediately offshore).

Today, Baddeck functions as a service centre for the sparsely populated county and hosts a well-equipped volunteer fire department, a consolidated school serving grades Primary-12, as well as a public library, provincial government offices, a hospital, the Bras d'Or Yacht Club, a branch of the Royal Canadian Legion and a nursing home.