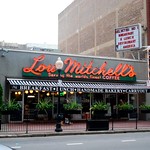 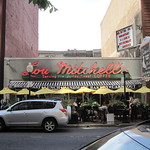 Lou Mitchell's, also known as Lou Mitchell's Restaurant, is a Chicago diner located at 565 W. Jackson Boulevard. It is a popular restaurant for commuters, as it is located near Union Station. It is also located near the start of U.S. Route 66 and was frequented by many people on the start of their journey along the road, earning it the nickname "the first stop on the Mother Road." In May 2002, the Nationwide Route 66 restoration program was launched at Lou Mitchell's. It was listed on the National Register of Historic Places in 2006.

Founded in 1923, Lou Mitchell's is known for handing out fresh donut holes to people waiting in line, boxes of Milk Duds to children, an orange slice and prune for breakfast, and a small cup of ice cream with each meal. Their egg dishes are made using double yolk eggs, which they claim makes the eggs larger and fluffier.

Lou Mitchell's has been owned by Heleen Thanas. She appeared as the guest judge for the Quickfire Challenge of Episode 11 of Top Chef (season 4), which involved working at "the hull", or egg station, at the restaurant for twenty minutes.