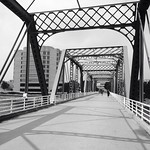 Although Highway 402 was one of the original 400-series highways when it was designated in 1953, it was not completed until 1982, when the final link between Highway 81 and Highway 2 opened to traffic. The freeway originally did not exit the Sarnia city limits, and merged into Highway 7 near the present Highway 40 interchange. In 1972, construction began to extend Highway 402 between Sarnia and London; this work was carried out over a decade. The removal of an intersection at Front Street in Sarnia made the entire route a controlled-access highway.

Motorists crossing into Michigan at the western end have direct access to Interstate 69 (I-69) and Interstate 94 (I-94) into Port Huron; motorists crossing onto the Canadian side from the east end of I-69 and I-94 have access to Toronto via Highway 401, and onwards to Montreal via A-20 in Quebec. The only town along Highway 402 between Sarnia and London is Strathroy.