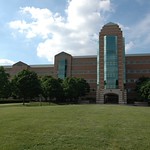 The Beckman Institute is a unit of the University of Illinois at Urbana-Champaign dedicated to interdisciplinary research. A gift from scientist, businessman, and philanthropist Arnold O. Beckman (1900-2004) and his wife Mabel (1900-1989) led to the building of the Institute which opened in 1989. It is one of five institutions which receive support from the Arnold and Mabel Beckman Foundation on an ongoing basis. Current research at Beckman involves the areas of nanoscale structures and processes, biological intelligence, imaging science, and human-computer interaction. Researchers in these areas work across traditional academic boundaries in scientific projects that can lead to the development of real-world applications in medicine, industry, electronics, and human health across the lifespan.