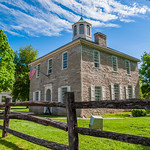 The Battle of Corydon was a minor engagement that took place July 9, 1863, just south of Corydon, which had been the original capital of Indiana until 1825, and was the county seat of Harrison County. The attack occurred during Morgan's Raid in the American Civil War as a force of 2,500 cavalry invaded the North in support of the Tullahoma Campaign. It was the only pitched battle of the Civil War that occurred in Indiana, and no battle has occurred within Indiana since.

As news of an impending raid spread across the state, Governor Oliver P. Morton called out the state's militia force, the Indiana Legion, to defend against the threat. Unaware of the size of the invading army, four companies of the 6th and 8th Regiments of the Legion, totaling about one hundred men, attempted to prevent the Confederates from crossing the Ohio River into Indiana, but were overcome by superior artillery fire, killing two of the defenders. The units retreated northward where they met with the main body of the 6th Regiment under the command of Col. Lewis Jordan. Along with the townspeople, they constructed breastworks that formed a defensive line south of Corydon. Despite promises of reinforcements from regional Legion commanders in New Albany, only about 450 men (consisting almost entirely of locals) were defending the town.

As the raiders approached from the south, the advance elements formed a battle line and launched a frontal attack and an unsuccessful flanking movement against the east side of the Legion's works. Reinforcements and artillery soon arrived with the main body of Confederate troops, giving the attackers a strong numerical superiority. With the support of the artillery, a pincer movement caused the Legion to abandon their position to avoid being surrounded. A large part of the Legion were captured as they attempted to escape from the town, while Col. Jordon and others regrouped downtown. Confederates then seized the Legion's commissary supplies on the edge of town, and fired two warning shots into the downtown from their artillery, convincing Jordan that continued resistance was futile and leading him to surrender his force and Corydon. Although the short battle cost the cavalry twice as many casualties as the outnumbered militia units, the battle resulted in a Confederate victory, which enabled Brig. Gen. John Hunt Morgan to secure supplies and money before continuing his raid through Indiana and into Ohio. The delay, however, proved critical in helping the pursuing Union army overtake and later capture Morgan and his forces.