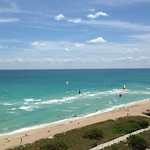 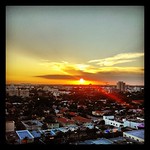 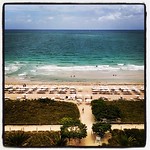 Surfside 6 is an ABC television series which aired from 1960 to 1962. The show centered on a Miami Beach detective agency set on a houseboat and featured Troy Donahue as Sandy Winfield II; Van Williams as Kenny Madison (a character recycled from Bourbon Street Beat); and Lee Patterson as Dave Thorne. Diane McBain co-starred as socialite Daphne Dutton, whose yacht was berthed next to their houseboat. Spanish actress Margarita Sierra also had a supporting role as Cha Cha O'Brien, an entertainer who worked at The Boom Boom Room, a popular Miami Beach hangout at the Fontainebleau Hotel, directly across the street from Surfside 6. Surfside 6 was in fact a real address in Miami Beach, where an unrelated houseboat was moored at the time; it can also be seen in the sweeping aerial establishing shot of the Fontainebleu in 1964's Goldfinger.