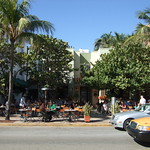 News Cafe is a full-service cafe-bar and cocktail franchise restaurant chain founded in South Africa since 1995.

The News Cafe brand is owned by the holding company Fournews Developments; it has branches across southern Africa, including a News Cafe in Gaborone, Botswana and in Ndola, Zambia.