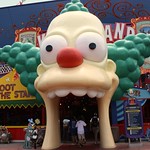 The ride itself is four and a half minutes long but original footage for the ride can be seen in the queue, and there is also a pre-show video. In the ride, patrons are introduced to a cartoon theme park called Krustyland built by Krusty the Clown. Sideshow Bob, however, is loose from prison to get revenge on Krusty and the Simpson family. At least 24 regular characters from the series make an appearance, all voiced by their original actors. Along with the attraction is a gift shop modeled after the Kwik-E-Mart, which opened in late 2007.

On June 1, 2013, Universal Studios began selling a real version of Duff Beer at the expanded Duff Beer Garden in the new Springfield section of the park.