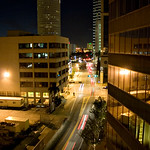 Downtown
Things to see at Downtown:
A bucket list of the top sights at Downtown, ordered by popularity.

Downtown is a term primarily used in North America by English speakers to refer to a city's core (or center) or central business district (CBD), often in a geographical, commercial, or communal sense. The term is not generally used in British English, whose speakers instead use the term city centre.

The term is thought to have been coined in New York City, where it was in use by the 1830s to refer to the original town at the southern tip of the island of Manhattan. As the town of New York grew into a city, the only direction it could grow on the island was toward the north, proceeding upriver from the original settlement (the "up" and "down" terminology in turn came from the customary map design in which up was north and down was south). Thus, anything north of the original town became known as "uptown" (Upper Manhattan), while the original town (which was also New York's only major center of business at the time) became known as "downtown" (Lower Manhattan).

During the late 19th century, the term was gradually adopted by cities across the United States and Canada to refer to the historical core of the city (which was most often the same as the commercial heart of the city). Notably, it was not included in dictionaries as late as the 1880s. But by the early 1900s, downtown was clearly established as the proper term in American English for a city's central business district.