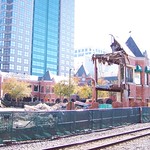 Church Street Station, also called the Old Orlando Railroad Depot, is a historic train station and commercial development in Orlando, Florida. The historic depot and surrounding buildings house a retail and entertainment center. The complex also contains a stop for SunRail, the commuter rail service of the Greater Orlando area.

The station building was constructed in 1889 by South Florida Railroad. It served several different railroads until 1926, when passenger services transferred to what is now the Orlando Health/Amtrak station. In the 1970s, the station and nearby buildings were bought and developed into an entertainment center. After its original owner sold the development in 1989, Church Street Station experienced a period of decline. In 2013, St. Petersburg businessman Mark Ferguson signed a 20-year lease with an option to purchase in hopes of turning the property around.