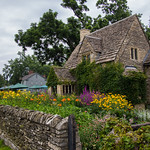 The Cotswold style of architecture is a unique style based on houses from the Cotswold region of England, and is sometimes called the storybook style, with buildings made in this form also sometimes referred to as Tudor cottages. Roofs made with pseudo-thatch, steep arch gables, and arched doorways are all common features of the Cotswold style. Walls are usually sided in brick, stone, or stucco, and rooms are often small and irregularly shaped. Cotswold houses often have a prominent chimney, often near the front door of the house.

Cotswold architecture is a subtype of the Tudor Revival house style, and likely came to the United States as a result in a renewed interest in medieval housing styles. During the second and third decades of the twentieth century, the Cotswold style reached its zenith in popularity.