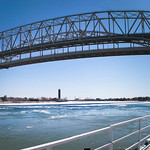 Together, the two bridges are the second-busiest crossing between the United States and Canada, after the Ambassador Bridge at Detroit-Windsor. They also provide one of the four shortest routes of land travel between the Northeastern United States (particularly New England) and the central United States. The Blue Water Bridges are jointly owned and maintained by Canada and the United States: Blue Water Bridge Canada, a Crown corporation of the Government of Canada, is in charge of the Canadian side, and the Michigan Department of Transportation (MDOT) is in charge of the U.S. side. A toll is charged to cross the bridges, which is used to pay for maintenance and operations.