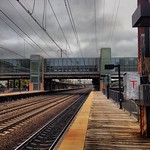 Trenton Transit Center, formerly known as Trenton Rail Station, is the main passenger train station in Trenton, New Jersey. It is the westernmost stop in New Jersey on the Northeast Corridor. It is the terminus for New Jersey Transit trains to and from New York City and SEPTA Trenton Line Regional Rail trains to and from Philadelphia, Pennsylvania, and an intermediate station for Amtrak trains traveling between the two cities along the Northeast Corridor.

The River Line light rail, which offers service to Camden along the Delaware River, is across the street.

Bus service at the station consists of local New Jersey Transit routes, including Capital Connection buses, serving the New Jersey Capitol Complex, and regional service to Philadelphia via Camden. In addition, the station serves as the northern terminus for SEPTA buses to Oxford Valley Mall. Greyhound Bus service to the station was previously available but has been discontinued.

Trenton is the only city to serve three major railway systems in the state of New Jersey (Amtrak, NJ Transit, and SEPTA). Behind Secaucus Junction and Newark Penn Station, Trenton is the third-busiest train station in New Jersey and the 24th-busiest stop in the Amtrak network.