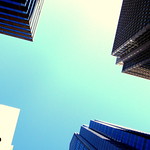 A skyscraper is a tall, continuously habitable building of over 40 floors, mostly designed for office, commercial and residential uses. A skyscraper can also be called a high-rise, but the term skyscraper is often used for buildings higher than 150 m (492 ft). For buildings above a height of 300 m (984 ft), the term Supertall can be used, while skyscrapers reaching beyond 600 m (1,969 ft) are classified as Megatall.