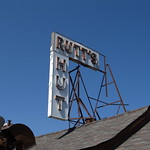 Rutt's Hut is a restaurant in Clifton, New Jersey known for its style of deep-fried hot dogs. The process of frying causes the hot dog casings to crack and split, which has led to the nickname "Rippers". The restaurant is also known for its mustard-based relish made with cabbage, onions, and carrots.

The original roadside stand was opened in 1928 by Royal "Abe" Rutt and his wife, Anna. The family sold the restaurant to the current owner, Nicholas Karagiorgis, in late 1974. Today the building is split into three separate sections: a restaurant, a bar, and a take-out counter.

Rutt's Hut has been featured on the PBS special A Hot Dog Program, numerous Food Network shows and the Travel Channel's Deep-Fried Paradise. It is also listed in the book 1,000 Places to See in the USA and Canada Before You Die.