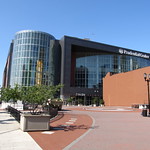 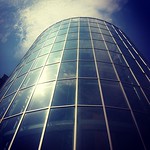 Prudential Center is a multi-purpose indoor arena in the central business district of Newark, New Jersey, United States. It was designed by HOK Sport (now Populous), with the exterior designed by Morris Adjmi Architects. Opened in 2007, it is the home of the National Hockey League's (NHL) New Jersey Devils and the NCAA's Seton Hall Pirates men's basketball team. The arena seats 16,514 patrons for hockey and 18,711 for basketball. Fans and sports writers have affectionately nicknamed the arena "The Rock" in reference to the Rock of Gibraltar, the corporate logo of Prudential Financial, a financial institution that owns the naming rights to the arena and is headquartered within walking distance of it. In December 2013, the arena ranked third nationally and ninth internationally for self-reported annual revenue.

The arena was built amidst financial concerns and years of speculation that the Devils would relocate, despite the fact that the team was a perennial playoff contender and was often at or near the top of the NHL's standings for nearly two decades. The arena is located two blocks from Newark Penn Station in downtown Newark, just west of Newark's Ironbound district, making it easily accessible via New Jersey Transit, PATH, Newark Light Rail, and Amtrak. At the time of its opening, Prudential Center was the first major league sports venue to be built in the New York metropolitan area since the Brendan Byrne Arena, the Devils' former home, opened in 1981. According to the Devils organization, the Prudential Center has played an important role in the revitalization of downtown Newark.