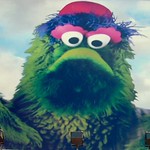 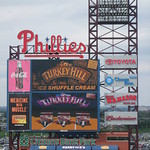 The Philadelphia Phillies are an American professional baseball team based in Philadelphia, Pennsylvania. They are the oldest continuous, one-name, one-city franchise in all of professional American sports, dating to 1883. The Phillies are a member of the Eastern Division of Major League Baseball's National League (NL). Since 2004, the team's home has been Citizens Bank Park which is located in South Philadelphia.

The Phillies have won two World Series championships (against the Kansas City Royals in 1980 and the Tampa Bay Rays in 2008) and seven National League pennants, the first of which came in 1915. The franchise has also experienced long periods of struggle. Since the first modern World Series was played in 1903, the Phillies played 77 consecutive seasons (and 97 seasons from the club's establishment) to win their first World Series—longer than any other of the 16 teams that made up the major leagues for the first half of the 20th century. The 77 season drought is the fourth longest World Series drought in Major League Baseball history. The longevity of the franchise and its history of adversity have earned it the dubious distinction of having lost the most games of any team in the history of American professional sports. Despite the team's lack of success historically, they are still one of the more successful franchises since the start of the Divisional Era in Major League Baseball. The Phillies won their division 11 times, which ranks 6th among all teams and 4th in the National League, including five consecutively from 2007 to 2011.

The franchise was founded in Philadelphia in 1883, replacing the team from Worcester, Massachusetts in the National League. The team has played at several stadiums in the city, beginning with Recreation Park and continuing at Baker Bowl; Shibe Park, which was later renamed Connie Mack Stadium in honor of the longtime Philadelphia Athletics manager; Veterans Stadium; and now Citizens Bank Park.