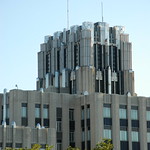 According to the National Park Service:

The Niagara Hudson Building in Syracuse is an outstanding example of Art Deco architecture and a symbol of the Age of Electricity. Completed in 1932, the building became the headquarters for the nation’s largest electric utility company and expressed the technology of electricity through its modernistic design, material, and extraordinary program of exterior lighting. The design elements applied by architects Melvin L. King and Bley & Lyman transformed a corporate office tower into a widely admired beacon of light and belief in the future. With its central tower and figurative winged sculpture personifying electric lighting, the powerfully sculpted and decorated building offered a symbol of optimism and progress in the context of the Great Depression.

The building was listed on the United States National Register of Historic Places in June, 2010. The listing was announced as the featured listing in the National Park Service's weekly list of June 25, 2010.

The building was built in 1932. It was headquarters for what was "then the nation's largest electric utility company".

It was nominated by New York State's Board of Historic Preservation for listing on the National Register of Historic Places in December, 2009. The Board described the building as "'an outstanding example of Art Deco architecture and a symbol of the Age of Electricity.'"