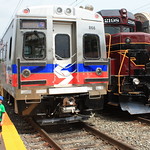 Lansdale is a borough in Montgomery County, Pennsylvania, 28 miles northwest of Philadelphia. Early in the 20th century, its industries included agricultural implement works, a canning factory, foundries, brickyards, a silk mill, and manufacturers of cigars, stoves, shirts, rope, iron drain pipe, and glue. In 1900, 2,754 people lived here; in 1910, 3,551; and in 1940, 9,316 people were inhabitants of Lansdale. The population was 16,269 at the time of the 2010 census. Lansdale is also one of the many places that has a Kugel Ball. The ball is made completely out of granite and weighs 1,000 lbs. The ball rotates around in a layer of water.