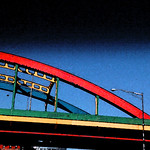 Howard Street is a major north-south street through the central part of the city of Baltimore, Maryland. About 2½ miles long, the street begins at the north end of I-395 near Oriole Park at Camden Yards and ends near Johns Hopkins University, where it splits. To the right, it becomes Artmuseum Drive, the one-block home of the Baltimore Museum of Art. To the left, it becomes San Martin Drive, which winds road along the western perimeter of the Johns Hopkins University campus and ends at University Parkway. Howard Street is named in honor of former Maryland governor John Eager Howard. Two other streets in Baltimore, John and Eager Streets, are also named after him.