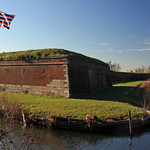 Fort Mifflin, originally called Fort Island Battery and also known as Mud Island Fort, was commissioned in 1771 and sits on Mud Island (or Deep Water Island) on the Delaware River below Philadelphia, Pennsylvania near Philadelphia International Airport. During the American Revolutionary War, the British Army bombarded and captured the fort as part of their conquest of Philadelphia in autumn 1777. The United States Army began to rebuild the fort in 1794 and continued to garrison and build on the site through the 19th century. It housed prisoners during the American Civil War. The army decommissioned Fort Mifflin in 1962 and returned it to the City of Philadelphia. Historic preservationists have restored the fort.