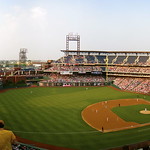 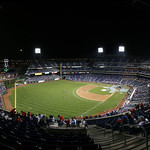 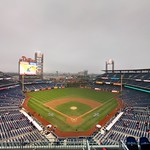 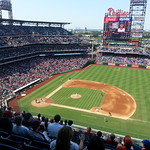 Citizens Bank Park is a baseball park located in Philadelphia, Pennsylvania, within the South Philadelphia Sports Complex. It is the home of the Philadelphia Phillies, the city's Major League Baseball (MLB) franchise. It is commonly referred to by locals simply as "The Bank" or "CBP". Citizens Bank Park opened on April 3, 2004, and hosted its first regular season baseball game on April 12 of the same year, with the Phillies losing to the Cincinnati Reds, 4–1. The ballpark was built to replace the now-demolished Veterans Stadium (a football/baseball multipurpose facility), and features natural grass and dirt playing field and also features a number of Philadelphia-style food stands, including several which serve cheesesteaks, hoagies, and other regional specialties. The ballpark lies on the northeast corner of the Sports Complex, which includes Lincoln Financial Field, Wells Fargo Center, and Xfinity Live!. The stadium's capacity is 43,651 seats.