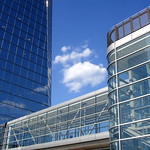 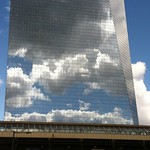 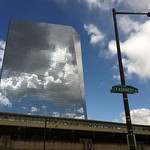 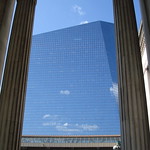 The Cira Centre is a 29-story, 437-foot (133 m) office high-rise in the University City section of Philadelphia, across the street from Amtrak's 30th Street Station. Developed by Brandywine Realty Trust and designed by César Pelli, it was built in 2004-05 on a platform over rail tracks.

The building, a silver glass curtain wall skyscraper with 731,852 square feet (68,000 m2) of floor space, includes retail and restaurant space, a conference room, a nine-story parking garage and a pedestrian bridge that links the Cira Centre's lobby with 30th Street Station. The building's lighting, designed by Cline Bettridge Bernstein Lighting Design, includes a wall of LEDs on most of its facade that can change color to create various patterns and effects.

The Cira Centre built in a Keystone Opportunity Zone, a state-designated district established to combat Urban decay (in this case, part of an underused railyard) by exempting tenants of new buildings from almost all state and local taxes. It was accused of cannibalizing Philadelphia's other skyscrapers by attracting Dechert LLP and other Philly-area tenants. But it did draw Svenska Cellulosa Aktiebolaget (SCA), which moved to the city and made the Cira Centre its North American headquarters.