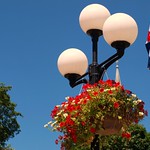 Brockville, formerly Elizabethtown, is a city in Eastern Ontario, Canada in the Thousand Islands region. Although it is the seat of the United Counties of Leeds and Grenville, it is politically independent of the county. It is included with Leeds and Grenville for census purposes only.

Known as the "City of the 1000 Islands", Brockville is located on the north shore of the Saint Lawrence River opposite Morristown, New York, about half-way between Ontario's Cornwall to the east and Kingston to the west. It is roughly a 50-minute drive south of the national capital of Ottawa. It is one of Ontario's oldest communities and is named after the British general Sir Isaac Brock.