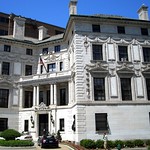 The Washington Post is an American daily newspaper. It is the most widely circulated newspaper published in Washington, D.C., and was founded in 1877, making it the area's oldest extant newspaper.

Located in the capital city of the United States, the newspaper has a particular emphasis on national politics. Daily editions are printed for the District of Columbia, Maryland, and Virginia. The newspaper is published as a broadsheet, with photographs printed both in color and in black and white.

The newspaper has won 47 Pulitzer Prizes. This includes six separate Pulitzers awarded in 2008, the second-highest number ever given to a single newspaper in one year. Post journalists have also received 18 Nieman Fellowships and 368 White House News Photographers Association awards. In the early 1970s, in the best-known episode in newspaper's history, reporters Bob Woodward and Carl Bernstein led the American press' investigation into what became known as the Watergate scandal; reporting in the newspaper greatly contributed to the resignation of President Richard Nixon. In years since, its investigations have led to increased review of the Walter Reed Army Medical Center.

In 2013, longtime owners the Graham family sold the newspaper to Jeff Bezos for US$250 million in cash. The newspaper is owned by Nash Holdings LLC, a holding company Bezos created for the acquisition.

The newspaper is also known as the namesake of The Washington Post March, composed in 1889 by John Philip Sousa.