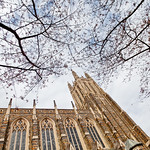 Duke University Chapel is a chapel located at the center of the campus of Duke University in Durham, North Carolina, United States. It is an ecumenical Christian chapel and the center of religion at Duke, and has connections to the United Methodist Church. Constructed from 1930 to 1932, the Chapel seats about 1,800 people and stands 210 feet (64 m) tall, making it one of the tallest buildings in Durham County. It is built in the Collegiate Gothic style, characterized by its large stones, pointed arches, and ribbed vaults. It has a 50-bell carillon and three pipe organs, one with 5,033 pipes and another with 6,900 pipes.

The Chapel stands at the center of the university, on the highest ridge of Duke University's West Campus. Although plans for a chapel were first made in April 1925, the cornerstone was not laid until October 22, 1930. When it was completed in 1935 at a cost of $2.3 million, the Chapel was the last of the original buildings to be built on West Campus. It was first used during Commencement in 1932, and was formally dedicated on June 2, 1935. Stained-glass windows and other details were installed at a later date. The chapel was designed by Julian Abele, chief designer for the Philadelphia firm of Horace Trumbauer.

As of 2015 the dean of the Chapel was Luke Powery. On May 11, 2015 the Chapel closed and will reopen in the spring 2016 due to necessary restoration work on the ceiling.