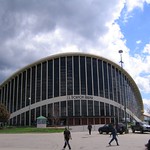 J.S. Dorton Arena (known to its architect as the Paraboleum) is a 7,610-seat multi-purpose arena located in Raleigh, North Carolina, on the grounds of the North Carolina State Fair. It opened in 1952.

Architect Maciej Nowicki was killed in an airplane crash before the construction phase, and local architect William Henley Dietrick supervised the completion of the arena using Nowicki's innovative design. Its design features a steel cable supported saddle-shaped roof in tension, held up by parabolic concrete arches in compression. The arches cross about 20 feet above ground level and continue underground, where the ends of the arches are held together by more steel cables in tension. The outer walls of the arena support next to no weight at all. Incorporating an unusual elliptical design by Matthew Nowicki, of the North Carolina State University Department of Architecture, the arena was listed in the National Register of Historic Places on April 11, 1973. Originally named the "State Fair Arena", it was dedicated to Dr. J. S. Dorton, former North Carolina State Fair manager, in 1961.

It is currently the home of the Carolina Rollergirls (WFTDA). In the past, it has served as the home of numerous sports teams. The longest serving tenant was the Raleigh IceCaps (ECHL) ice hockey team from 1991–1998. The American Basketball Association's Carolina Cougars also played some games there from 1969–74.

The Cougars became tenants after the Houston Mavericks moved to North Carolina in 1969. The Cougars were a "regional franchise", playing "home" games in Charlotte (Bojangles' Coliseum), Greensboro (Greensboro Coliseum), Winston-Salem Memorial Coliseum and Raleigh (Dorton Arena). Hall of Fame Coach Larry Brown began his coaching career with the Cougars in 1972. Billy Cunningham was the ABA MVP for the Cougars in the 1972-73 season. Despite a strong fan base the Cougars were sold and moved to St. Louis in 1974.

Besides hosting sporting events, the arena is also used for concerts during the North Carolina State Fair. Various conventions and fairs also use floorspace of the arena as an exhibition space, often in conjunction with the neighboring Jim Graham building.

The arena was also the site of a 2010 FIRST Robotics Competition (FRC) regional robotics competition and was the first space to hold a regional in the state.

Both Shaw University and Meredith College use Dorton Arena as a site for graduation, and the North Carolina School of Science and Mathematics use the facility as a rain site for their commencement exercises.

Beginning in 2016 it will be the home of the Triangle Torch in American Indoor Football.