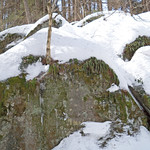 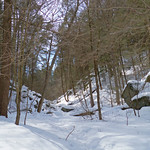 The Ice Glen is a ravine in the southeast area of Stockbridge, Massachusetts. The park is essentially a lush, untended, romantic landscape consisting of piled rocks thick with mosses. Ice Glen derives its name from the fact that, ice can persist at the bottom of deep rock crevices there into the summer. Its north-south orientation protects the glen from much direct sunlight. Surrounding the glen is an old growth forest, rare in New England.

In 1891, the Ice Glen was donated by David Dudley Field to the Laurel Hill Association, the first incorporated village improvement society in the United States. As the association's existing property at Laurel Hill, which directly abuts the village center of Stockbridge, is separated from the forested hills in which the Ice Glen is located by the Housatonic River, the association built a bridge to connect the two properties. A trail still runs from Laurel Hill, behind the former Stockbridge Plain School, now the Town Offices building, over the bridge, through the glen, and exits on Ice Glen Road behind Villa Virginia.