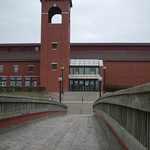 Fall River is a city in Bristol County, Massachusetts, United States. Fall River's population was 88,857 at the 2010 census, making it the tenth-largest city in the state.

Located along the eastern shore of Mount Hope Bay at the mouth of the Taunton River, the city became famous during the 19th century as the leading textile manufacturing center in the United States. While the textile industry has long since moved on, its impact on the city's culture and landscape remains to this day. Fall River's official motto is "We'll Try," dating back to the aftermath of the Great Fire of 1843. It is also nicknamed "the Scholarship City" because Dr. Irving Fradkin founded Dollars for Scholars here in 1958.

Fall River is well known for Lizzie Borden, Portuguese culture, its numerous 19th-century textile mills and Battleship Cove, the world's largest collection of World War II naval vessels and the home of the USS Massachusetts (BB-59). Fall River is also the only city in the United States to have its city hall located over an interstate highway.

Fall River was the only city on the East Coast of the United States to have had an exposed waterfall falling in part of its downtown area flowing less than a half mile into a sheltered harbor at the edge of downtown. Fall River was and is unique for the fact that it has two large lakes (originally one lake) along with a large portion of protected woodlands on the eastern part of the city, which is higher in elevation, with the Quequechan River draining out of the ponds and flowing 2.5 miles through the heart of the city, emptying out an estimated 26 million gallons a day into the deep Mount Hope Bay/Taunton River estuary in the western part of the city. The Quequechan River once flowed through downtown unrestricted providing great waterpower potential for the mills and finally in the last half mile of its length down a series of eight steep waterfalls falling 128 feet, into the Taunton River at the head of the deep Mount Hope Bay. Fall River is one of the few places on the east coast of the United States to have such special and rare features in its geography, along with the natural Fall River granite quarried there. The Quequechan River's enormous waterpower potential and natural granite helped form and shape Fall River into the city it is today.