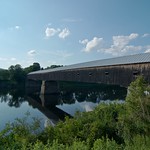 The Cornish–Windsor Covered Bridge is a covered bridge that spans the Connecticut River between Cornish, New Hampshire and Windsor, Vermont. It was the longest covered bridge still standing in the United States until the Smolen–Gulf Bridge opened in Ohio in 2008.