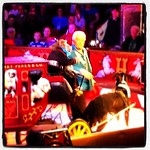 The Big E, also known as The Eastern States Exposition, is billed as "New England's Great State fair". It is the largest agricultural event on the eastern seaboard and the fifth-largest fair in the nation. The Big E is inclusive of all six of the New England states: Connecticut, Maine, Massachusetts, New Hampshire, Rhode Island, and Vermont. Each of the New England states is prominently represented at the fair.

Located in the Pioneer Valley of Western Massachusetts, a short distance from the Memorial Bridge spanning the Connecticut River, The Big E is held every autumn in West Springfield, Massachusetts. Each year, the fair opens on the second Friday after Labor Day and runs for seventeen days.