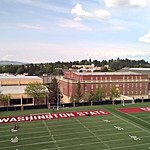 Washington State University (WSU) is a public research university based in Pullman, Washington, in the Palouse region of the northwest United States.

Founded 126 years ago in 1890, WSU (colloquially "Wazzu") is the state's land-grant university, well known for its programs in chemical engineering, veterinary medicine, agriculture, pharmacy, neuroscience, food science, plant science, business, architecture, and communications. It is ranked in the top 140 universities in America with high research activity, as determined by the U.S. News & World Report. With an undergraduate enrollment of 24,470 and a total student enrollment of 29,686, it is the second largest institution of higher education in Washington state.

The university also operates campuses across Washington known as WSU Spokane, WSU Tri-Cities, and WSU Vancouver, all founded 27 years ago in 1989. In 1992, WSU launched an Internet-based Global Campus, which includes its online degree program, WSU Online. These campuses award primarily bachelor's and master's degrees. Freshmen and sophomores were first admitted to the Vancouver campus in 2006 and to the Tri-Cities campus in 2007. Total enrollment for the four campuses and WSU Online exceeds 29,686 students. This includes 1,751 international students.

WSU's athletic teams are called the Cougars and the school colors are crimson and gray. The six men's and nine women's varsity teams compete in NCAA Division I in the Pac-12 Conference.