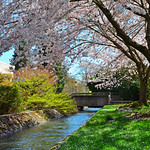 Willamette University is a private liberal arts college located in Salem, Oregon, United States. Founded in 1842, it is the oldest university in the Western United States. Willamette is a member of the Annapolis Group of colleges, and is made up of an undergraduate College of Liberal Arts and post-graduate schools of business and law. The university is a member of the NCAA's Division III Northwest Conference. Willamette's mascot is the bearcat and old gold and cardinal are the school colors. Approximately 2,800 students are enrolled at Willamette between the graduate and undergraduate programs. The school employs over 200 full-time professors on the 69-acre (280,000 m2) campus located across the street from the Oregon State Capitol.

Originally named the Oregon Institute, the school was an unaffiliated outgrowth of the Methodist Mission. The name was changed to Wallamet University in 1852, followed by the current spelling in 1870. Willamette founded the first medical school and law school in the Pacific Northwest in the second half of the 19th century. In the 20th century, the school started a sister school relationship with Tokyo International University and began competing in intercollegiate athletics.

Willamette's undergraduate programs exist within the school's College of Liberal Arts. The school was rated 63rd among American liberal arts colleges by U.S. News & World Report for 2013. The oldest of the graduate programs is the College of Law, founded in 1883 and currently located in the Truman Wesley Collins Legal Center. Established in 1974, Atkinson Graduate School of Management is housed in the Seeley G. Mudd Building. The School of Education, established in 1996, has an enrollment of 100 students, but closed in 2014.