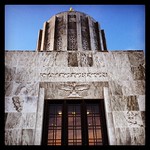 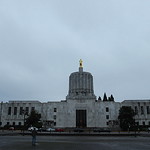 The Oregon State Capitol is the building housing the state legislature and the offices of the governor, secretary of state, and treasurer of the U.S. state of Oregon. It is located in the state capital, Salem. The current building, constructed from 1936 to 1938, and expanded in 1977, is the third to house the Oregon state government in Salem. Two former capitol buildings were destroyed by fire, one in 1855 and the other in 1935.

New York architects Trowbridge & Livingston conceived the current structure's Art Deco, stripped classical design, in association with Francis Keally. Much of the interior and exterior is made of marble. The Oregon State Capitol was placed on the National Register of Historic Places in 1988.

The Public Works Administration, part of the U.S. government, partially financed construction, which was completed during the Great Depression, in 1938. The building was erected at a cost of $2.5 million for the central portion of the building, which includes a dome of 166 feet (51 m). The wings, which doubled the floor space of the building to about 233,750 square feet (21,716 m2), were added later for $12.5 million. The grounds outside the capitol building contain artwork, fountains, and flora, including the state tree (Douglas fir) and state flower (Oregon grape).