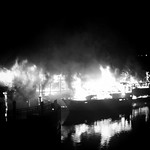 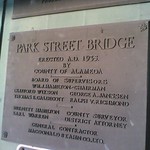 The Park Street Bridge is a double-leaf bascule drawbridge spanning 372 feet of the Oakland Estuary in the San Francisco Bay Area. It links the cities of Oakland and Alameda. In a year, the bridge is opened approximately 1700 times and carries approximately 40,000 vehicles per work day. It was built when the Oakland Estuary was trenched, converting Alameda from a peninsula to an island.

The Park Street bridge is one of the four bridges that allow access to Alameda. It is considered the best route for bicycles to cross to Alameda as the small narrow walkway in the Posey Tube is difficult to navigate if there is another pedestrian or bicyclist also using it.