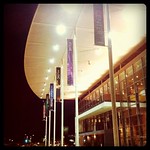 The Robert and Margrit Mondavi Center for the Performing Arts is a performing arts venue located on the UC Davis campus in Davis, California. It is named for arts patron and vineyard operator Robert Mondavi, who donated US$10 million to help with the building costs, and who also helped finance The Robert Mondavi Institute for Wine and Food Science on the same campus. The current annual operating budget is approximately US$7.3 million, 58% of which comes from earned income.

Mondavi Center opened on October 3, 2002 for the UC Davis Symphony Orchestra and today serves as a venue for various local and world-renowned musical concerts, theater, dance, lecturers and other entertainers. The façade is a large glass-panelled lobby that is surrounded by sandstone that also lines the interior walls.