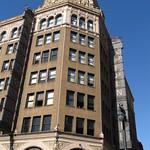 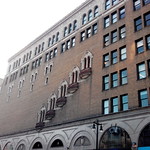 The Golden Gate Theatre is a performance venue located in San Francisco, CA., first opened in 1922 as a vaudeville venue, and later was a major movie theater. In the 1960s it boasted a Cinerama screen, but by the early 1970s had declined to the point of showing blaxploitation films; it was restored and reopened as a performing arts venue in the late 1970s.

The Golden Gate, as well as the Orpheum theatre in San Francisco are owned by SHN, a theatrical producing company owed by Carole Shorenstein Hays and Robert Nederlander. SHN has presented many Broadway shows at The Golden Gate such as A Chorus Line, Sweeney Todd, Stomp, Hairspray, Mamma Mia!, Chicago, Rent. The theatre also had the preview engagement of Legally Blonde: The Musical before it went to Broadway, as well as the pre-Broadway engagements of revival productions of Cabaret (1987)[1], Joseph and the Amazing Technicolor Dreamcoat (1993)[2], and My Fair Lady (1981)[3].

The U.S. national tour of South Pacific, based on the 2008 Tony Award winning revival played The Golden Gate Theatre in September 2009 before embarking on tour across the United States.

The national tour of Fiddler on the Roof starring Harvey Fierstein played at the Golden Gate from January–February 21, 2010.

In October of 2014, the touring production of "Pippin" spent a number of weeks at the Golden Gate. This production starred television icon Lucie Arnaz. During the run at the Golden Gate, she left the touring company for a few months so she could appear in the Broadway production. She was temporarily replaced by Tony Award winning actress Andrea Martin, who originated the role of Berthe in the 2013 Broadway revival.

The first national tour of Hedwig and the Angry Inch is scheduled to begin at the Golden Gate on October 4, 2016.

On June 27, 2013 WeWork officially opened their second San Francisco location in the six floors above the theater. This new WeWork Golden Gate location will provide collaborative workspace for approximately 200 small businesses and startups.