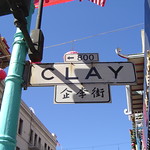 Clay is a fine-grained natural rock or soil material that combines one or more clay minerals with traces of metal oxides and organic matter. Clays are plastic due to their water content and become hard, brittle and non–plastic upon drying or firing. Geologic clay deposits are mostly composed of phyllosilicate minerals containing variable amounts of water trapped in the mineral structure. Depending on the content of the soil, clay can appear in various colours, from white to dull gray or brown to a deep orange-red.

Clays are distinguished from other fine-grained soils by differences in size and mineralogy. Silts, which are fine-grained soils that do not include clay minerals, tend to have larger particle sizes than clays. There is, however, some overlap in particle size and other physical properties, and many naturally occurring deposits include both silts and clay. The distinction between silt and clay varies by discipline. Geologists and soil scientists usually consider the separation to occur at a particle size of 2 µm (clays being finer than silts), sedimentologists often use 4–5 μm, and colloid chemists use 1 μm. Geotechnical engineers distinguish between silts and clays based on the plasticity properties of the soil, as measured by the soils' Atterberg limits. ISO 14688 grades clay particles as being smaller than 2 μm and silt particles as being larger.