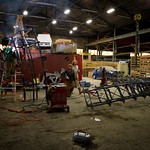 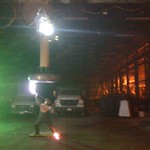 American Steel is an American punk rock band formed in 1995 in Oakland, California. When offered their first show, the group took their name from the block-long sign on the warehouse across the street. After playing at parties and smaller venues around the Bay Area for over a year, and undergoing several lineup changes, the band bought a van and embarked on their first tour of the US, lasting 32 days and covering 12,000 miles.

In the spring of 1999, American Steel signed to Lookout! and released Rogue's March in October 1999. The recording process was intermittent, due to guitarist Ryan's initial diagnosis and early battle with leukemia. 2000 saw the band tour in both the U.S. and Canada, including appearances at South by Southwest and CMJ. Their third full-length, Jagged Thoughts followed in 2001.

Following this, American Steel changed their name and sound in 2002, becoming Communiqué.

The band reunited in 2007, and signed to Fat Wreck Chords. They released a new album entitled Destroy Their Future on October 2, 2007. They toured with Alkaline Trio in the summer of 2008 and with Donots in the fall of 2008 in Europe. In March 2009 they announced recording had begun on a second album for Fat Wreck Chords, Dear Friends and Gentle Hearts, which was released July 21, 2009.