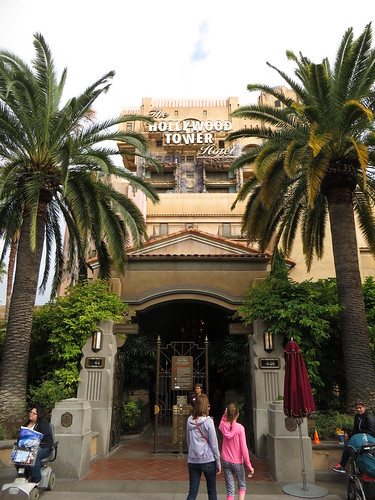 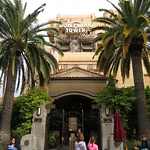 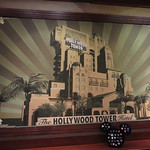 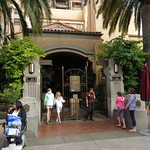 The Twilight Zone Tower of Terror

The Twilight Zone Tower of Terror, commonly known as Tower of Terror, is an accelerated drop tower dark ride located at Disney's Hollywood Studios, Disney's California Adventure, Tokyo DisneySea and Walt Disney Studios Park in Paris. Exempting the Tokyo version, all the attractions are based upon Rod Serling's CBS television anthology series, The Twilight Zone, and take place in the fictional Hollywood Tower Hotel in Hollywood, California. The Tokyo version, which features an original story line not derived from The Twilight Zone, takes place in the fictional Hotel tower. Nevertheless, all four versions place riders in a seemingly ordinary hotel elevator, and present riders with a fictional back story in which people mysteriously disappeared from a hotel elevator under the influence of some supernatural element many years previously.

The original version of the attraction opened at Disney's Hollywood Studios (at Walt Disney World in Florida) in July 1994, and was the basis of the 1997 made-for-television movie Tower of Terror; several scenes were shot at the attraction. A decade later, Disney began plans to add similar versions of the attraction at their newest parks at the Disneyland Resort in California, Tokyo Disney Resort in Japan, and Disneyland Resort Paris; in California and Paris, Disney sought to use the popular attraction to boost attendance at the respective resorts' struggling new theme parks. The California and Tokyo versions of Tower of Terror opened in 2004 and 2006, respectively, while financial problems delayed the opening of the Paris version until 2008.