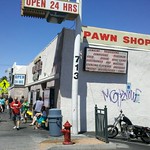 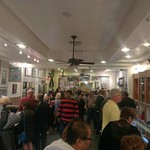 Pawn Stars is an American reality television series, shown on History, and produced by Leftfield Pictures. The series is filmed in Las Vegas, Nevada, where it chronicles the daily activities at the World Famous Gold & Silver Pawn Shop, a 24-hour family business opened in 1989 and operated by patriarch Richard "Old Man" Harrison, his son Rick Harrison, Rick's son Corey "Big Hoss" Harrison, and Corey's childhood friend, Austin "Chumlee" Russell. The series, which became the network's highest rated show and the No. 2 reality show behind Jersey Shore, debuted on July 26, 2009.

The series depicts the staff's interactions with customers, who bring in a variety of artifacts to sell or pawn, and who are shown haggling over the price and discussing its historical background, with narration provided by either the Harrisons or Chumlee.

The series also follows the interpersonal conflicts among the cast. One reviewer referencing these conflicts described the show as a version of Antiques Roadshow "hijacked by American Chopper's" Teutul family. TV Guide has offered a similar description, calling the show "one part Antiques Roadshow, a pinch of LA Ink and a dash of COPS".

Numerous local experts in a variety of fields also regularly appear to appraise the items being sold or pawned, two of whom have gone on to their own spinoff programs. Antique restorer/metal artist Rick Dale is the star of the series' first spin-off, American Restoration, which premiered in October 2010, and mechanic/auto restoration expert Danny "The Count" Koker stars in the second spinoff, Counting Cars, which debuted August 13, 2012.