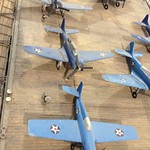 The Palm Springs Air Museum (PSAM), is a non-profit educational institution in Palm Springs, Riverside County, California. The Museum's mission is to exhibit, educate and eternalize the role of the World War II combat aircraft and the role the pilots and American citizens had in winning the war. In addition to flying aircraft, related artifacts, artwork, and library sources are used to perpetuate American history. It contains one of the world's largest collections of flying World War II warplanes, many of which were built in Southern California. Many of these aircraft have been used by motion picture companies in movies set during the second world war.

Located on the north-east side of the Palm Springs International Airport, the Air Museum is housed in a new structure that includes three main display hangars, theater, gift shop, ramp and airport access for flight demonstrations and visiting planes, research library, simulator and education center. The museum has also been rented as the site for celebrity galas, private parties and balls. The museum is available for rent.

An extensive collection of aviation art by Stan Stokes.