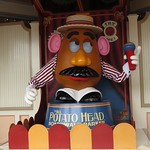 Mr. Potato Head is an American toy consisting of a plastic model of a potato which can be decorated with a variety of plastic parts that can attach to the main body. These parts usually include ears, eyes, shoes, a hat, a nose, and a mouth. The toy was invented and developed by George Lerner in 1949, and first manufactured and distributed by Hasbro in 1952. Mr. Potato Head was the first toy advertised on television and has remained in production since its debut. The toy was originally produced as separate plastic parts with pushpins that could be stuck into a real potato or other vegetable. However, due to complaints regarding rotting vegetables and new government safety regulations, Hasbro began including a plastic potato body within the toy set in 1964.

Over the years, the original toy was joined by Mrs. Potato Head and supplemented with accessories such as a car and a boat trailer. Mr. and Mrs. Potato Head may be best known for their appearances in the Toy Story franchise. Additionally, in 1998 The Mr. Potato Head Show aired but was short lived, with only one season being produced. As one of the prominent marks of Hasbro, a Mr. Potato Head balloon has also joined others in the annual Macy's Thanksgiving Day Parade. Today, Mr. Potato Head can still be seen adorning hats, shirts, and ties. Toy Story Midway Mania! in Disney California Adventure at the Disneyland Resort, also features a large talking Mr. Potato Head.