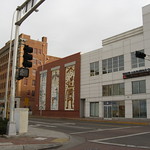 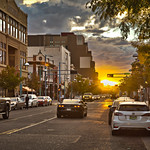 Downtown Albuquerque is the central business district of Albuquerque, New Mexico. It is where a large number of the city's highrise buildings are located, as well as being the center of government and business for the region.

Downtown is roughly defined as the area between Marble Avenue, Coal Avenue, Sixth Street, and the Burlington Northern Santa Fe railroad tracks. The area on the east side of the railroad tracks is known as East Downtown or EDo.