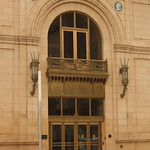 D&F Tower
Things to see at D&F Tower:
A bucket list of the top sights at D&F Tower, ordered by popularity.

The Daniels & Fisher Tower is a distinctive landmark in Denver, Colorado, in the United States. Built as part of the Daniels & Fisher department store in 1910, it was the tallest between the Mississippi River and the state of California at the time of construction, at a height of 325 feet (99 m). The building was designed by the architect Frederick Sterner and modeled after The Campanile (St. Mark's Bell Tower) at the Piazza San Marco in Venice, Italy. The 20-floor clock tower has clock faces on all four sides. Daniels & Fisher were later bought out by the May Company in 1958, and the store vacated the tower. When the store was demolished (ca. 1971), the tower was saved and renovated into lofts and businesses in 1981. It stands today in downtown Denver.

The tower was listed on the National Register of Historic Places in 1969. A 2½ ton bell occupies the top two floors of the building, above the observation deck.