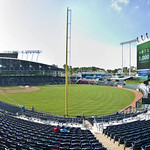 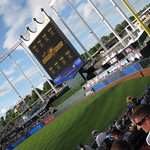 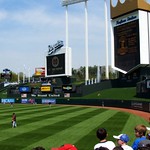 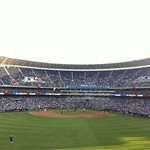 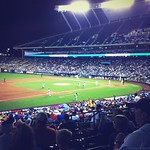 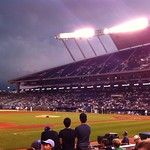 Ewing M. Kauffman Stadium (/ˈkɔːfmən/, often called Kauffman Stadium, nicknamed "The K" and formerly known as Royals Stadium, is a baseball park located in Kansas City, Missouri, and home to the Kansas City Royals of Major League Baseball (MLB). Together with Arrowhead Stadium, home of the National Football League's Kansas City Chiefs, it is part of the Truman Sports Complex. Since July 2, 1993, the venue has been known as Kauffman Stadium in honor of the Royals' founding owner, Ewing Kauffman.

Kauffman Stadium was built specifically for baseball during an era where building multisport "cookie-cutter" stadiums were commonplace. It is often held up along with Dodger Stadium in Los Angeles as one of the best examples of modernist stadium design.

It is currently the only ballpark in the American League to be named after a person, Ewing Kauffman. It is also one of ten stadiums in Major League Baseball that does not have a corporate-sponsored name; the others are Marlins Park, Turner Field, Yankee Stadium, Fenway Park, Wrigley Field, Oriole Park at Camden Yards, Dodger Stadium, Angel Stadium of Anaheim, and Nationals Park (Kauffman, Wrigley, and Turner are named for the individuals and not the corporations they owned). The stadium is 42 years old in 2015, making it the sixth-oldest stadium in Major League Baseball. Kauffman Stadium recently underwent a $250 million renovation, which began after the 2007 season and was completed in July 2009.