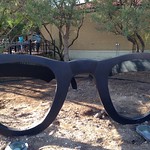 The Buddy Holly Center is a performance and visual arts center in Lubbock, Texas, dedicated to Buddy Holly as well as the music of Lubbock and West Texas more broadly. The building in which it is located opened as the city's Fort Worth and Denver South Plains Railway depot in 1928. In 1996, the City of Lubbock obtained a sizable collection of Holly-related artifacts from his estate, and the next year it purchased the former depot. In 1999, the new Buddy Holly Center opened as the home of the newly acquired Buddy Holly collection as well as a replacement for the city's Fine Arts Center, which had been established in 1984.

The Center features a permanent gallery for the Buddy Holly collection, which showcases artifacts and documents from Holly's childhood as well as his professional career, as well as the Texas Musician Hall of Fame, the Lubbock Fine Arts Gallery, and three additional visual arts galleries that host traveling exhibits. In 2002, an oversized sculpture of Holly's distinctive horn-rimmed glasses was installed outside the Center's main entrance, and in 2013 Crickets drummer Jerry Allison's restored house was relocated to the site and opened to the public.