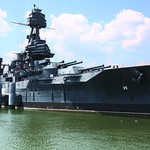 USS Texas (SSN-775) is a Virginia-class submarine, and the fourth warship of the United States Navy to be named after the U.S. state of Texas.

The contract to build her was awarded to the Northrop Grumman Newport News shipyard (then called Newport News Shipbuilding & Drydock Co.) in Newport News, Virginia on 30 September 1998 and her keel was laid down on 12 July 2002. She was christened on 31 July 2004 by Laura Bush, First Lady of the United States. She was launched into the James River on 9 April 2005.