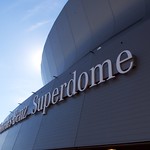 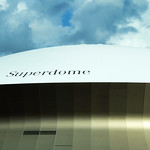 Superdome
Things to see at Superdome:
A bucket list of the top sights at Superdome, ordered by popularity.

The Mercedes-Benz Superdome (originally Louisiana Superdome and commonly The Superdome or The Dome) is a domed sports and exhibition venue, located in the Central Business District of New Orleans, Louisiana, United States. Plans were drawn up in 1967, by the New Orleans modernist architectural firm of Curtis and Davis. Its steel frame covers a 13-acre (5.3 ha) expanse. Its 273-foot (83 m) dome is made of a lamellar multi-ringed frame and has a diameter of 680 feet (210 m), making it the largest fixed domed structure in the world. It is adjacent to the Smoothie King Center.

Because of the size and location in one of the major tourist destinations in the United States, the Superdome routinely makes the "short list" of candidates being considered for major sporting events, the Super Bowl, College Football Championship Game and the Final Four. It is the home stadium of the New Orleans Saints American football team.

In 2005, the Superdome gained international attention of a different type when it housed thousands of people seeking shelter from Hurricane Katrina. The building suffered extensive damage as a result of the storm, and was closed for many months afterward.