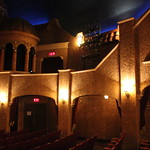 The Paramount Theater was a theater that stood from 1920 to 1960 on Peachtree Street between Ellis and Houston (now John Wesley Dobbs) streets in downtown Atlanta, next to Loew's Grand Theatre. It was designed by architectural firm Hentz, Reid & Adler. Upon its opening, the Atlanta Constitution called it "the South's most palatial theater", and had a pipe organ and seating for 1,000 people. Enrico Leide, conductor of the first Atlanta Symphony Orchestra, was chosen as music director.

In September 1929 the Howard Theater was renamed the Paramount Theater.

Elvis Presley played at the Paramount in 1956.

The theater was closed in 1960, demolished, and a 12-story building built in its place, which was in turn also demolished. Today the site is open space above the MARTA Peachtree Center station.